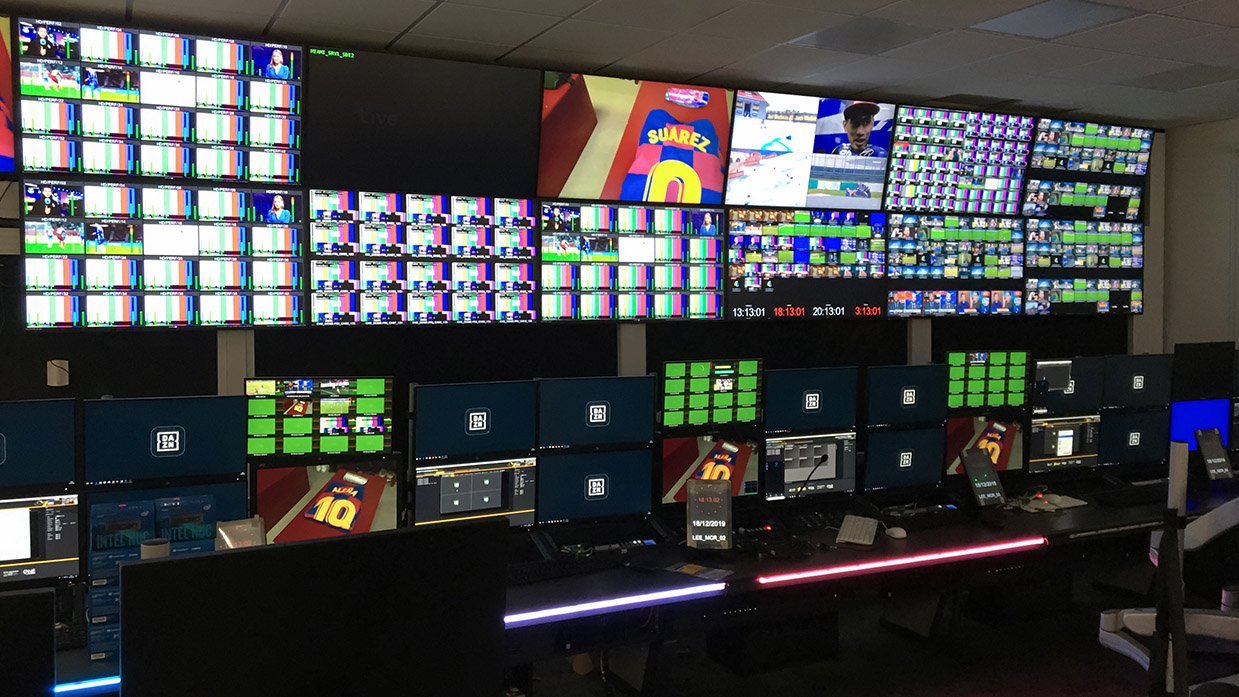 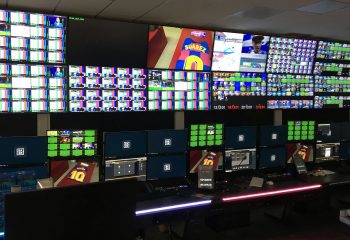 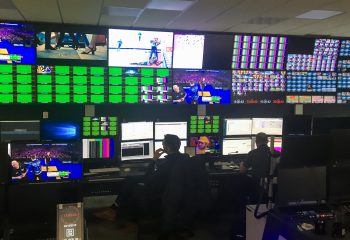 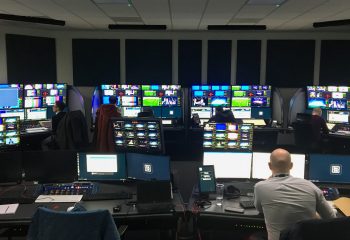 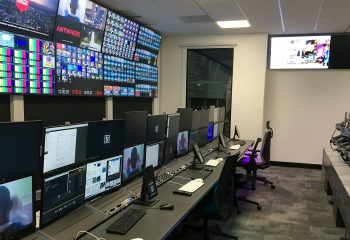 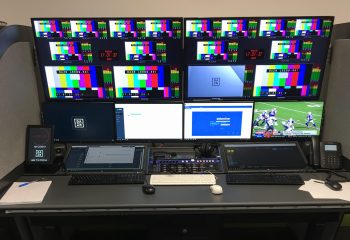 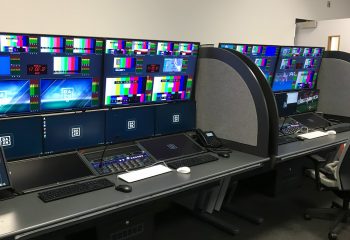 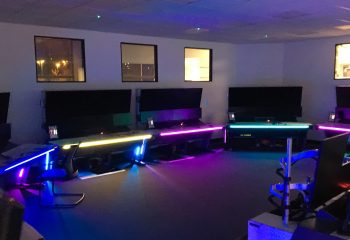 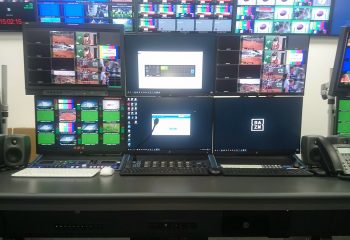 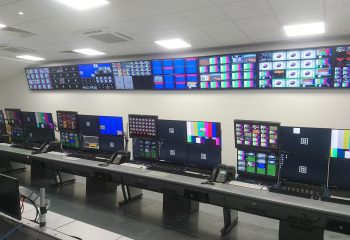 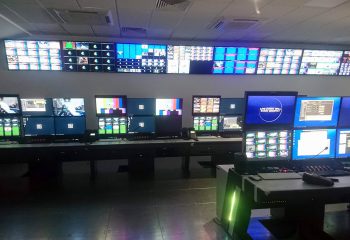 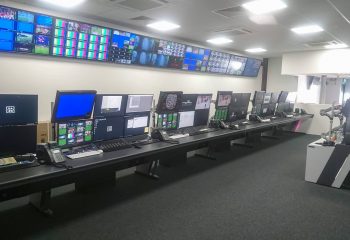 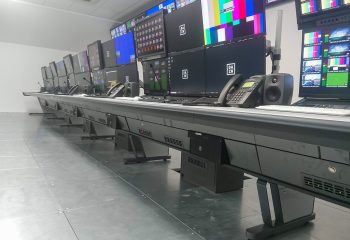 ES Broadcast undertook an ongoing largescale multi-project expansion of MCR and TX facilities and modernisation programme for DAZN, which provides ground-breaking live and on-demand sports streaming services to territories around the world.

With over 25,000 events each year, DAZN was already one of the world’s largest sports broadcasters even before launching its service in more than 200 countries and territories in December 2020. Ahead of this expansion, the company needed to dramatically increase its TX operator capacity and to build added resilience into its technical operations.

DAZN runs regional production hubs in several territories to handle tasks such as local-language commentary, with all content distribution routed through UK media centres in Leeds and Bangor, near Belfast. It was critical therefore that these facilities be able to handle the massive increase in content output precipitated by the planned launch of DAZN’s services into new markets.

In anticipation of this launch, ES Broadcast worked in partnership with DAZN to map out an upgrade programme, providing technological consultation, equipment supply, consultation on facility requirements such as power and air conditioning, system design, installation, documentation, uninterrupted migration from old to new systems, and decommissioning of former facilities.

The project began in late 2018 with the identification of a new transmission platform which could deliver the resilience, automation and advanced TX playout capabilities needed for DAZN’s ambitious new venture. Working with the client to understand the specific challenges of the project, Grass Valley’s ICE and Morpheus products were chosen as the preferred automated channel playout solution.

Capable of handling the complex transmission requirements of a very large broadcast playout system, ICE and Morpheus delivered the flexibility, scalability and above all reliability DAZN knew would be needed to support its growth. This new TX platform was originally installed into the client’s existing Leeds TX facilities.

DAZN had outgrown its Bangor MCR, both in terms of operator capacity and technical capability, and needed to modernise its technology to be able to run its new services from the site. Working in parallel with architectural and construction firms, ES Broadcast carried out expansion work which saw the removal of existing walls to create an open-plan operations room combining the new larger MCR with existing production space used for DAZN’s WTA women’s tennis coverage.

The centre was to remain operational throughout, so a staged approach adhering to strict timeframe goals was required to guarantee minimal disruption to ongoing services. Firstly all existing MCR and Engineering services were moved to create space for the first phase of building work. During construction, ES Broadcast built up a further seven racks for the expanded CAR, as well as running all interconnecting cables for the new floorplan.

Upon completion, Engineering operations were installed into the new space to return them to 100% functionality as soon as possible. Finally the new MCR desks and monitor wall were completed and all operations migrated onto the new systems.

Constructed in just eight weeks, the new MCR has ten operations positions and a further three engineering positions, all furnished with custom-built Lund Halsey desks. A seven-screen gallery wall gives expanded monitoring capabilities while another three screens were installed as notice boards around the room. The MCR allows operators to shuffle and mix audio – for instance to add local commentary – before sending feeds out for distribution.

The third and largest phase of the expansion project was to move DAZN’s Leeds operation into a brand-new – and much larger – TX facility in the city’s White Rose Office Park. The ground-up nature of the build allowed ES Broadcast to implement a new design, incorporating lessons the client had learnt from its growth at the old media centre.

Completed in barely 10 weeks from commencement to go-live, the project was made all the more challenging by the need for DAZN to remain on air throughout the transition to the new TX facility. Continuity of services was ensured by installing ten TX operator stations in the new facility, using all-new equipment, so that these could then be used to continue handling on-air programming while equipment for the remaining eight desks was repurposed from the old centre.

Before this transition could be put into effect, the Grass Valley ICE and Morpheus systems which ES Broadcast had installed in the previous Leeds centre also needed to be migrated to the new building. To achieve this, all infrastructure cabling was laid and tested at the new site, a new 10-rack CAR installed and a spare Morpheus core brought online ahead of migrating TX. Initially two servers were brought over and tested, then more servers followed so the full complement was split between the two centres. Once all TX operations had been moved, the remaining servers could be migrated. Risk during this changeover was further mitigated by DAZN’s ability to run TX from its other facilities if required.

Custom-designed for broadcasting live sports, DAZN’s Leeds White Rose Media Centre includes a TX facility with 18 operator desks and four supervisor/multi-functional positions, an MCR built to accommodate six operators and three engineers, and a network operations centre (NOC) with space for five operators. The MCR boasts a monitor gallery of 14 55” Samsung QM screens, while a further seven of these screens make up the monitor wall in the NOC.

Automation innovation is apparent in the use of Densitron IDS control systems to allow swift configuration of each individual operator desk. Utilising schedule information, this system loads relevant multiviewer content and upcoming scheduled event information for each operator to user workstations. It also enables easy switching of multiviewer layouts, and even controls colour-coded desk lighting to indicate event statuses such as on air. Operators can easily control their workflow using a 10” IDS touchscreen panel on each desk. DAZN plans to enable further features of this technology in future.

Each TX operator desk is set up to allow the operator to run four to six events at once and is equipped with an integrated monitor stack holding two 47” Samsung QM multiviewer screens on the top row. Four 22” thin-bezel HP monitors occupy the bottom row of the monitor stacks. Below these is a Clearcom comms panel and two 22” touchscreens mounted at a 30-degree angle from the desk, which allow operators to carry out a range of software-based operational tasks such as router control without the need for multiple hardware panels.

The desks themselves were custom-designed by Lund Halsey for streamlined operator use. Acoustic treatments on the desks and divider panels minimise noise from operator cross-talk.

Both the Leeds and Bangor centres utilise Evertz’s MViP-II multiviewer solution for operator positions, which provides direct, customised monitoring for operators. A decentralised multiviewer monitoring system run on TAG Video Systems technology allows main MCR monitoring walls and TX in/out streams to be driven from a data centre IP stream that can be pulled up on any monitor, allowing much greater flexibility of resourcing, whereby any event can be monitored and controlled from any of DAZN’s facilities.

This IP-based operation across the media centres delivers expanded availability and improved resilience and disaster recovery for the client – but conversely presented one of the project’s technical challenges because of the high reliance on ethernet networking. With such a large number of operator desks each running high volumes of VOIP monitoring, cooperation with the client’s corporate network teams to ensure connectivity was vital to delivering a successful solution. Meanwhile TX communications are run globally, so that all sites are linked via a local matrix to a central core and data centres. This allows, for example, operators working on local language variations of the same content to be in direct communication.

ES Broadcast was able to help keep costs under budget by repurposing existing equipment for around half the TX operator desks, and by offering a buy-back service on equipment that was to be replaced. The latter was part of a full decommission of the former Leeds facility, which included the removal of all equipment and cabling. During this process the site’s production galleries were removed in to racking and stored for safe-keeping prior to being reinstalled in the new media centre later this year as the next phase of the project.

Further phases of work are planned for both the Leeds and Bangor sites. Bangor will eventually be migrated onto new Grass Valley Morpheus cores and ICE channels for its TX operation, while the TX room will be rebuilt with more desks at the new spec to bring operations into line with the Leeds facility. In Leeds meanwhile, the production galleries removed and stored from the old site will be installed in the new media centre.